Now that the aforementioned roadworks have gone from the M80, it is possible for drivers to enjoy the full effect of the Cumbernauld Mermaid.  The 33ft high mermaid, named Arria and designed by artist Andy Scott, overlooks the A80 northbound to the north of Auchenkilns junction in Cumbernauld.

The £250,000 publicly funded work is the latest in a long line of monolithic sculptures springing up around the country in the name of public art.

Her form, similar to a giant metal mermaid, features two huge swooping arcs inspired by the Gaelic name for Cumbernauld, “comar nan allt”, which means “coming together of waters.”  and it is hoped the work will help Cumbernauld start ridding itself of its dismal image that has seen it win the Carbuncle Award for poor architecture.

The poem “Watershed” penned by award-winning Scottish poet Jim Carruth is displayed at the foot of the sculpture, which sports a retro hairstyle meant to evoke the optimistic early days of the 1960s-built new town.

People generally don’t have anything particularly nice to say about Cumbernauld, but lets not forget some of its plus points:

Hmmm … maybe it needs a little more than a mermaid statue.  If you were to ask local residents I’m pretty sure they’d say that Cumbernauld needs burning down and rebuilding, especially the town centre. It needs new shops, new restaurants and new bars … something to liven the place up at night.   Lets hope this is just the start of good things to come for the area.

Where have all the cones gone?

For the first time, ever, I was able to drive along the M80 from Glasgow to Falkirk this morning without a single traffic cone in sight on either carriageway.  Now some people reading this will say “so what?” but for those of us who have used this route regularly over the past 10 years or so, you will understand what a momentous occasion this is!

For as long as I can remember there have been speed limits and hold-ups on this road and the delays and frustrations for anyone travelling north to places such as Perth, Dundee, Inverness and Aberdeen are well documented.  What an absolute pleasure it is to be able to drive at 70mph at last!  For all my friends who live in Cumbernauld I am sure you will have been dancing in the street and celebrating being released from the prison of roadworks that have been endured for so long.

In fact, it is almost as exciting as the recent opening of the M74 extension … almost, but not quite!

The origin of the modern traffic cone is a mystery but further research has been carried out on the subject and for those interested information on its evolution can be found at www.trafficcone.com, the home of the Traffic Cone Preservation Society.

Instead of spending millions of pounds turning George Square in Glasgow into a replica of Philapdelphia for the new Brad Pitt movie World War Z (that’s zee apparently and not zed), replacing all of the road signs and traffic lights with American equivalents

and shipping in a load of yellow taxis for good measure, why did they not just make the film in, well, Philadelphia?  Surely that would have been a lot cheaper and, perish the thought, a lot more authentic?

It has also been reported that the Jolie/Pitt entourage hired an entire train for their journey today – you can bet they didn’t suffer the delays and disasters that befall us mere mortals on this route and you can bet your bottom dollar they didn’t have to eat the same revolting food that we can purchase from the buffet car!!!  But are they happy?  ……….

Driving to work along the M80 this morning I found myself behind a car displaying this sticker on the back window.  I nearly crashed into them it made me laugh out loud!  What are the best car stickers you’ve seen?

With a few limited exceptions, it’s illegal to publish or broadcast an advert which discriminates because of sex, or which advertises discriminatory services. For example, it is illegal for an employer to advertise for a job using words like ‘craftsman’ or ‘handyman’, as this might give the impression that the job is only open to men.  Likewise, in today’s politically correct society I am pretty sure it’s illegal to advertise that a packet of crisps are “Man Crisps”. 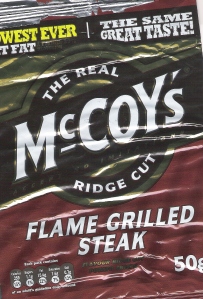 Imagine my surprise, therefore, that having consumed a packet of McCoy’s Flame Grilled Steak crips, I turned over the packet to read that they were indeed “Man Crisps” … you could have knocked me down with a feather!

I was so shocked that I dialled the Customer Services number for United Biscuits printed on the back of the packet, underneath the further politically incorrect words “Have you tried our other flavour man crisps”.

Unsurprisingly the lady that answered was ready with her answers (I can only assume that I am not the first person to have made this complaint).  She advised me that these were a special promotion (which is not apparent on the front of the packet) and that it was a bit of fun because the thickness of the crisps and the ridges on them made them more “manly” but that of course women could enjoy them too!!!

Now I am no bra-burning feminist I can assure you but things like this absolutely horrify me.  In the 21st Century I would have thought that a company the size of United Biscuits who in 2009 turned over £1.26billion with a profit before tax of £223.4million would not wish to alienate 50% of their customer base.

One of the best parts of organising the recent launch of Popinjay was the ordering of branded goods to promote the company. Even better was the searching of various internet sites to find the best value for money deals around. I have hit on a fantastic way of getting amazing deals and wanted to share this with you – it’s brilliant!!!

There’s a company called Vistaprint which I believe is based in Holland but supplies across the globe. Check out your inbox for emails from them as the deals they have, which are ongoing, are incredible and not available if you go directly to their website.

My first order was for 100 buttefly postcards for Popinjay. At a cost of just £4.70 for postage and packaging, I was so delighted I ordered a further 100 (again for £4.70) for the film we’re promoting, Making Ugly.

I then managed to order a banner and again was just charged for the postage and packing.

It is excellent quality and made of a fairly hardy vinyl material so should last a long time. Guess what? I felt compelled to order another one so that we can create a much bigger impression at venues in the future!

This second banner arrived in the post this morning and it led me to think that there were other products that I could order, again at significantly lower cost than usually available. On checking my email, sure enough there was another message from Vistaprint with yet more offers available. Without delay I ordered some mugs for the office and some canvas bags and window decals!!! This time the products were discounted and postage and packing was free – another brilliant deal.

As I think you can see from the images here, this is a very effective way of marketing your business but, as with any new start-up, money is tight and although these things are very useful, you have to be careful not to get carried away and make sure you’ve done your research to minimise costs wherever possible.

So, my advice to you is as follows. Sign up to Vistaprint at www.vistaprint.com but don’t order anything. Wait a few days and the email offers will be sent through to you and you can happily start uploading your images and getting your promotional products for free!

Don’t believe everything you read

A story which suggested that users of Internet Explorer have a lower IQ than people who chose other browsers appears to have been an elaborate hoax.

A number of media organisations, including the BBC, reported on the research, put out by Canadian firm ApTiquant.  It later emerged that the company’s website was only recently set up and staff images were copied from a legitimate business in Paris.  It is unclear who was behind the stunt.

The story was reported by many high profile organisations including CNN, the Daily Mail, the Telegraph and Forbes.

Questions about the authenticity of the story were raised by readers of the BBC website who established that the company which put out the research – ApTiquant – appeared to have only set-up its website in the past month.  Thumbnail images of the firm’s staff on the website also matched those on the site of French research company Central Test, although many of the names had been changed.

The BBC contacted Central Test who confirmed that they had been made aware of the copy but had no knowledge of ApTiquant or its activities.

ApTiquant issued a press release claming that it had invited 100,000 web users to take IQ tests and matched their results with the type of browser they used.  It also supplied extensive research data.  The results claimed to show that Internet Explorer users were generally of lower intelligence.

The BBC sought alternative views for the original story, including Professor David Spiegelhalter of Cambridge University’s Statistical Laboratory, who said: “I believe these figures are implausibly low – and an insult to IE users.”