Well it didn’t take too long did it?   Just a few days into the infamous Edinburgh Tram service and the complaints are starting already.

Residents living near an Edinburgh tram stop are calling for its tannoy system to be switched off after it could be heard several streets away.

One resident said: “I woke up on Saturday morning thinking my bed was in an airport arrival terminal.”

Another woman compared it to 1980s TV sitcom Hi-de-Hi in which holiday camp visitors are blasted awake with a morning tannoy announcement.

Today they are apparently broadcasting information regarding this evening’s One Direction concert at Murrayfield  in addition to the actual tram information the system was designed for.  Not so much a case of “Hello Campers”, but more “Hello Harry Styles!”…..

Disclaimer: Any suggestion of a certain boy band member’s sexuality is the opinion of the writer alone and not based on any facts whatsoever!!!

And so today the realisation of 6 years of disruption!  As the Edinburgh Trams finally rolls into action, the question still remains as to whether this project has been worth the expense, traffic/parking chaos and the general nightmares caused for businesses, residents and visitors to our Capital.

The first tram service set off at 05:00 from the Gyle shopping centre in the west of the city to York Place in the city centre, before heading out to Edinburgh Airport and then back to the Gyle. 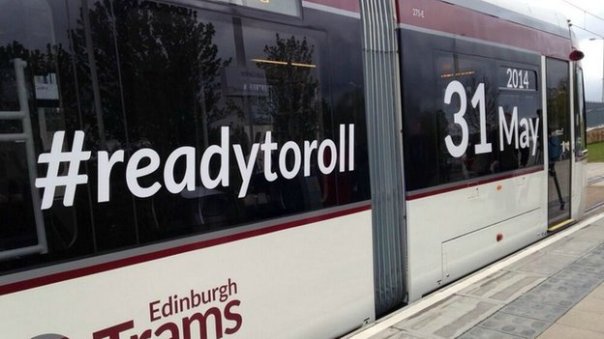 In case my readers aren’t fully aware of the back story, the Edinburgh tram route cost £776m and covers 8.7 miles (14km) from the New Town to Edinburgh Airport and in the decade since the first money was allocated to the project, the price has doubled, the network has halved and it has taken twice as long to build as originally planned.

Only time will tell but I can’t help but admire the work of a mystery prankster who decided to re-design the logo and plaster the City with his work.

Make no bones about it

Car Parks are very much in the news at the moment. 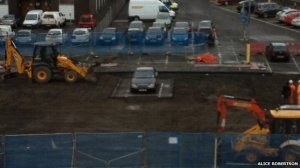 Last Thursday workers at Edinburgh’s Waverley Station blocked off an area of the parking compound ready for resurfacing work.   When they turned up for work the following morning however, a Mercedes had parked in the middle of the cordoned-off area.   Undeterred, the crew dug up the surface all around the dark blue car.   Workers did build a tiny ramp in front of the car to allow its owner to drive away on his or her return, but at the time of writing there is no news that the obviously embarrassed driver had reclaimed their vehicle.

And today it has been confirmed that a skeleton found beneath a Leicester car park is that of English King Richard III.  The skeleton has revealed that he suffered from severe scoliosis and although around 5ft 8in tall (1.7m), the condition meant he would have stood significantly shorter and his right shoulder may have been higher than the left.  Experts from the University of Leicester said DNA from the bones matched that of descendants of the monarch’s family.   Lead archaeologist Richard Buckley told a press conference to applause: “Beyond reasonable doubt it’s Richard.”

Which brings me to one of my favourite car parking jokes:

Q: What do men and parking spaces have in common?

A: The good ones are always taken and the free ones are either very small or handicapped.   BOOM!!!!!

The beginning of the end?

So the deed has been done and David Cameron has signed the independence vote deal, known as the “Edinburgh Agreement”.  But while all the polls say that by two to one, Scots do not believe the country would be more economically  successful on its own, making a ‘no’ vote all but certain in the autumn of 2014, I can’t help but worry that common sense will fly out of the window come 2014. 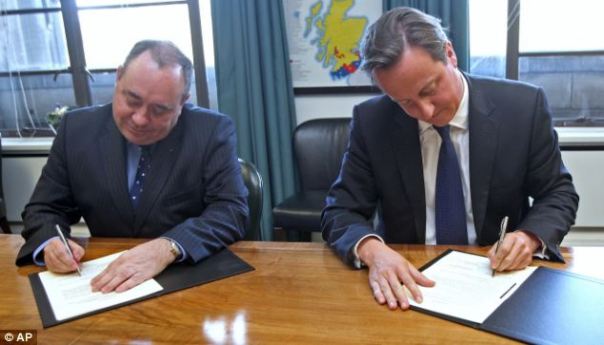 The Nationalists will jump on the bandwagon of the significance of the date – 2014  marks the 700th anniversary of The Battle of Bannockburn (the first Scottish War of Independence when Scotland scored a decisive victory over Edward and the English), and there is also the fact that the Commonwealth Games are being held in Glasgow just before the crucial vote.

Alex Salmond has got his own way on 2 counts – the date of the referendum (Cameron had wanted it to take place next year) and also on allowing 16 and 17 year olds to vote.  David Cameron did however win on one key point.  Voters will be asked a single  question – whether they want in or out of the United Kingdom – despite  Mr Salmond’s desire  for a second option of increased powers for Holyrood, “devo-max”.

I find it hard to believe that any right-minded individual could believe that Scotland would be better off as an independent nation.  The economic figures speak for themselves but the SNP  also seem to have failed to understand one other crucial matter.  Mr Salmond claims an independent Scotland could  simply remain in the EU and keep Sterling. Constitutional experts and the  Westminster government say, however, that Scotland would have to reapply  to  the EU for membership and commit – like  all new EU members – to  joining the ill-fated euro.  A recipe for disaster?  I think so!

As an English person who has been living in Scotland for the past 16 years, I truly believe that most voters are too sensible to vote Yes, especially in these disastrous economic times – it would not be Scotland the Brave, but Scotland the Foolhardy!  If the disaster that is Scottish Independence does happen – I’ll be on the first flight out of here!

I’ve been reading an article today about the reasons why we behave so oddly in lifts.

Many of us use them several times a day without really noticing.   And yet the way we behave in lifts, or elevators as they are known in the US, reveals a hidden anxiety.   Most of us sort of shut down.   We walk in. We press the button. We stand perfectly still.

So why are we so awkward in lifts?

It is probably because you don’t have enough space.  Usually when we meet other people we have about an arm’s length of distance between us but that’s not possible in most lifts so it’s a very unusual setting.  It’s unnatural.   In such a small, enclosed space it becomes vital to act in a way that cannot be construed as threatening, odd or in any way ambiguous.  The easiest way to do this is to avoid eye-contact completely.

But perhaps there is more to it than just social awkwardness.  Perhaps it is more about being trapped inside this small enclosed space if the lift breaks down.  Regular Twitter followers will remember Stephen Fry’s amusing tweet when he got stuck in a lift at Centre Point in London in 2009 – it made the national news!  The reality of course is far from amusing as you have no idea how long it will be before you are set free from your incarceration and, if you’re anything like me, you’ll probably be desperate to go to the toilet as well!

One thing I always do now when entering a lift is to read the name of the manufacturer which is usually displayed on the plaque where you find the buttons to operate the darn thing.  This goes back to when I worked on the 4th floor of a building in Edinburgh and each time I got in, I smiled inwardly, saying to myself “Schindler’s Lift”!  Not very mature I know, but it always made me smile [and colleagues groan!].

For what it’s worth, if the thought of travelling in a machine that’s moving and over which you have no control, you can’t see its engine and you don’t know how it’s working fills you with dread – err on the side of caution and take the stairs!

Best Joke at the Edinburgh Fringe 2012

For the third year running I’ve managed to miss any of the acts playing the Edinburgh Fringe Festival but, if the jokes below are anything to go by, I must make more of an effort next year!

This year, Stewart Francis’s one-liner about David and Victoria Beckham naming their children has won the award for the funniest joke of the Festival.  The Canadian comedian won the award, given out by TV channel Dave, for the joke:

“You know who really gives kids a bad name? Posh and Becks.”

Francis and British comedian Tim Vine’s jokes both feature twice in the top ten best list published by Dave. Other comedians whose jokes made the list include Will Marsh and Rob Beckett.

Tim Vine’s jokes (he won the award for best joke two years ago) were voted into second and sixth place by a public vote of three thousand comedy fans, after Edinburgh jokes were whittled down to a shortlist of 30 by a panel of judges. Here are the top ten jokes chosen this year:

2. Tim Vine – “Last night me and my girlfriend watched three DVDs back to back. Luckily I was the one facing the telly. ”

3. Will Marsh – “I was raised as an only child, which really annoyed my sister.”

4. Rob Beckett – “You know you’re working class when your TV is bigger than your book case.”

7. George Ryegold – “Pornography is often frowned upon, but that’s only because I’m concentrating.”

8. Stewart Francis – “I saw a documentary on how ships are kept together. Riveting!”

9. Lou Sanders – “I waited an hour for my starter so I complained: ‘It’s not rocket salad.”

10. Nish Kumar – “My mum’s so pessimistic, that if there was an Olympics for pessimism … she wouldn’t fancy her chances.”

and still on the subject of art …

Writing the last post I was reminded of the sculpture that has long been a part of the scenery in Kingston-upon-Thames town centre – the line of 12 disused red telephone boxes that have been tipped up to lean against one another in an arrangement resembling dominoes.  This sculpture was commissioned in 1988 as part of the landscaping for the (then) new Relief Road, and is called “Out of Order”.

Unveiled on the 19th December 1989, it stands in Old London Road near the junction with Clarence Road. 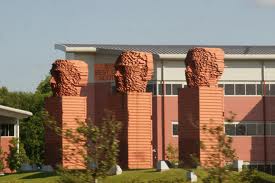 What I didn’t know then was that the sculptor, David Mach (56), is the Scot from Methil in Fife who also designed the “Big Heids” that are a familiar sight for us regular M8 drivers between Glasgow and Edinburgh.

On further investigation it seems that this tiny little town in the Kingdom of Fife produces some of the best artistic talent that Scotland is so proud of, from a population of only 11,000. 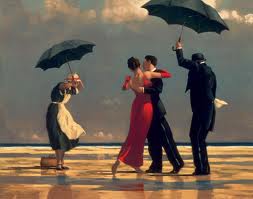 Another artist to grow up in this industrial seaside town is Jack Vettriano (60) who only took up painting as a hobby in his twenties when his girl friend bought him a set of water colours!  Vettriano’s original paintings now regularly fetch huge six figure prices but he is thought to make more money from the sale of reproductions. Each year a new set of limited edition prints are published, and his most popular work, “The Singing Butler”, sells more posters and postcards than any other painting in the UK.

It’s amazing what you find out quite by chance when looking for something else!

Today’s guest blog posting is short and sweet and comes from my good friend Lorraine – please take a look here!

The silence of the trams

Following on (again) from the previous post about the Edinburgh trams, I think this video sums up the whole fiasco really rather well:

Just re-read my last post and realised that the same 3 letter acronym applies for “cost/benefit analysis” and “can’t be arsed”.

Is this a coincidence or are more sinister forces at work?