This week’s headlines would have been a gift for Frankie Howerd who, for my younger readers, was an English comedian and comic actor who died in 1992.  Famous for several catchphrases, I have used artistic licence to tweak one of these as a headline for this post – I’m sure he would have approved!

You must have been on another planet if you haven’t heard about the outrage of the revelation that the beef content in one Everyday Value burger sold by Tesco was actually 29 per  cent horse meat.

There are of course many countries that find eating horsemeat totally acceptable [across Europe and South America for example], but in the UK we seem to find it abhorrent – but the main reason to be scandalised is not that Tesco was selling burgers containing horse, but that they weren’t labelled as such.  It’s not illegal to sell horsemeat in the UK, but it is illegal to sell food containing ingredients that aren’t listed on the label.

Of course the Social Media networks had a field day and the jokes were coming thick and fast.  However, no-one expected Tesco’s themselves to score such a spectacular “own goal” as they did last night when they tweeted this:

Despite claims that they had scheduled the tweet before the scandal broke, I can’t help but think this could come back and bite them on their proverbial backside [trying desperately not to succumb here to the temptation of a quip about a horse’s ass].   It may on the other hand prove to be the best marketing strategy ever … only time will tell.

So I leave you with my own favourite tweet on the subject … have a great weekend!

Food allergies are a pain … dairy products make me sneeze and #Tesco burgers make me a little hoarse!!!

On reading an article today about how Researchers have found that the lobster population in Maine has begun resorting to cannibalism – the increased number of crustaceans in Maine’s water has resulted in the bigger lobsters feasting on smaller ones apparently – I was reminded of my favourite lobster joke:

Declan the humble crab and Kate the Lobster Princess were madly, deeply and passionately in Love. For months they enjoyed an idyllic relationship until one day Kate scuttled over to Declan in tears.

“We can’t see each other anymore….” she sobbed.

“Daddy says crabs are too common,” she wailed. “He claims you, a mere crab, and a poor one at that, are the lowest class of crustacean… and that no daughter of his will marry someone who can only walk sideways.”

Declan was shattered, and scuttled sidewards away into the darkness and to drink himself into a filthy state of aquatic oblivion. That night, the great Lobster Ball was taking place. Lobsters came from far and wide, dancing and merry-making, but the lobster Princess refused to join in, choosing instead to sit by her father’s side, inconsolable.

Suddenly the doors burst open, and Declan the crab strode in. The Lobsters all stopped their dancing, the Princess gasped and the King Lobster rose from his throne. Slowly, painstakingly, Declan the crab made his way across the floor… and all could see that he was walking not sideways, but FORWARDS, one claw after another!

Step by step he made his approach towards the throne, until he finally looked King Lobster in the eye. There was a deadly hush. Finally, the crab spoke…………..

Have some respect for your arteries!

First we had the deep fried Mars Bar, reportedly  invented in 1995 in the Haven Chip Bar (now the Carron), in Stonehaven near Aberdeen.  Originally a novelty item it has now become synonymous with Scotland’s notoriously unhealthy diet.   After an item on the Channel4 programme, the Big Breakfast, chip shops around the country started putting it on their menus.  One phone call to a local paper and in the space of just a few days a bit of fun between a chip shop owner and some local children in a Scottish fishing town, the dish was transformed into a global cultural and gastronomic phenomenon. The product is “not authorised or endorsed” by Mars Inc.

But like all phenomenons, there is always someone who wants to take the theme still further and today we read that an ex-pat Brit, Chris Sell from Rugby, Warwickshire, who has a  New York chip shop, has come up with this “tasty” treat to satisfy hungry Brits living in the Big Apple who love fish and chips and a traditional fry-up – a 1,200 calorie battered sandwich with a full English breakfast filling!

Now I don’t know about you, but the thought of anything deep fried makes me cringe!  On the rare occasions I do find myself having a fish and chip supper I always strip the fish of all the batter before eating but I do know people who love this type of fatty food – each to their own.

However, why ruin a perfectly good English breakfast by wrapping it in batter?  This type of heart attack on a plate needs to be consigned to the nearest dustbin – unless you’ve got a hangover of course when I’m sure it will hit the spot nicely!   And the next big decision you will need to make?  Will it be red or brown sauce with that?!?

I’ve read today that Cadbury is launching a chocolate bar aimed at women in an attempt to win back lost sales among the diet-conscious.  Regular readers will know just how much this type of targeted advertising really annoys me – just check out my post on Man Crisps!

The Crispello is the first new chocolate bar launched by the company since the 1990s and will be backed by a £7million advertising campaign.  Apparently annual sales of single chocolate bars have fallen by some 6.6 per cent in a market worth around £800million a year.  Evidence suggests that this slump is almost entirely caused by women buying  less chocolate.

Cadbury, owned by American food company Kraft, believes the Crispello will particularly appeal to women who are worried about putting on weight.  The new bar comes in at 165 calories, compared with 260 for a Mars bar and the Crispello, which is similar in taste and consistency to Ferrero Rocher chocolates, has three chocolate-covered wafer shells with a soft milk chocolate filling.  It is designed with a resealable pack so it can be eaten one piece at a time. [yeah, right!]

The more cynical amongst us might say that perhaps their sales have fallen because since Kraft took them over Cadbury chocolates just don’t taste the same.  If you’ve ever had the misfortune to try Hershey chocolate from the US you’ll know what I mean when I say that the Americans just don’t do chocolate like Cadbury used to!

Instead of these half-hearted attempts to win sales on gender, why not just go back to the old recipes that we know and love?  Just a thought …..

Laziness descends to another level! 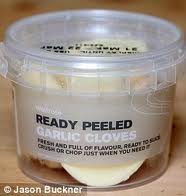 I remember being appalled on a recent shopping trip to Waitrose to find pots of ready peeled garlic on sale in the vegetable aisle .  Now I’m all for saving time and making my life easy but really, just how difficult is it to peel a clove of garlic?

The madness continues however.  I’ve read this week about a supermarket chain which has been forced to apologise after they stacked their shelves at stores in Austria with peeled bananas – pre-packaged and wrapped in foil.  German-owned Billa, which calls on its own customers to use more common sense when it comes to the environment, was slammed by customers who took to Facebook and Twitter to condemn the move.

Shoppers first became aware of the wasteful product after the store itself allegedly posted pictures of the product online.

You have to ask yourself what is going to be next?  Are we really that consumed with our lives that eating, one of the most basic and simple pleasures in life, has become such a chore that we can’t do anything for ourselves any more.  Exactly how far away from just taking a pill to satisfy our hunger cravings are we?

I for one will definitely NOT be going down that route!  Quite apart from enjoying the whole process of preparing and cooking food, there is nothing more satisfying than others enjoying your handiwork.  So you can keep your ready-made meals and pre-prepared products – I’m not buying!!!