← Temper your expectations!
Only in Scotland! →

Last night there was a huge, foootball-shaped hole in my evening.  For the first time since 8th June there was no Euro2012 action and the TV schedulers failed to take advantage of this fact and give us anything else worth watching!

At least tonight things are “back to normal” with the quarter-final match between the Czech Republic and Portugal kicking off at 19.45.

Czech Republic captain (and Arsenal player) Tomas Rosicky is still nursing the Achilles injury he picked up against Greece in the second group match but is hoping to still play and the Portuguese don’t appear to have any injury worries and are expected to name an unchanged side from the 11 that defeated the Dutch in the last game.  The same starting line-up incidentally that Portugal used in each match during the group stage – the only team to do this! 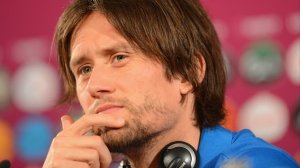 At the pre-match press conference today, Rosicky, sporting a beard along with the rest of the Czech squad, said he and his team mates would continue to grow their facial hair for as long as they remained at the tournament.

“We look scary as a team. Hopefully they (the beards) will get worse and worse,” he joked.

Of course, if you don’t like football, you could always watch Ocean Giants on BBC2.  The last in the series, this documentary (narrated by Stephen Fry) explores the vocal ranges of marine mammals.  Failing that, there is always Emmerdale and Lewis!!!

← Temper your expectations!
Only in Scotland! →