It’s all in the name

News last week that a rare ‘zonkey’ – the offspring of a male zebra and a female donkey – has been born at an animal reserve in Florence,  Italy.

Adorable Ippo, who has the colouring of a donkey but the distinctive stripes of a zebra, is reported to be in good health.  She was apparently born after her father clambered over a fence to reach her mother.

Is it just me or have they missed a trick?  Surely she should have been called “Debra” !!!

The reign of Spain continues in Ukraine

So that’s it – the end of another tournament and Spain are the worthy winners, beating Italy 4-0 to enter the record books as the only team to win 3 consecutive major international competitions, Euro2008, World Cup 2010 and Euro2012 – quite an achievement for a team often described throughout this competition as “boring”.

Well they were far from boring tonight.  If you watched the game you’ll know that this was a game totally dominated by Spain from the start and their passing game meant Italy had very little chance of doing anything on the rare occasions when Spain allowed them to take possession of the ball.

Leading through first-half goals from David Silva and Jordi Alba, Spain’s victory was sealed when final substitute Thiago Motta was stretchered off, leaving the Azzurri to play the final half hour with 10 men.  And just to rub it in, Chelsea duo Fernando Torres and Juan Mata scored in the final minutes to complete a sensational victory. 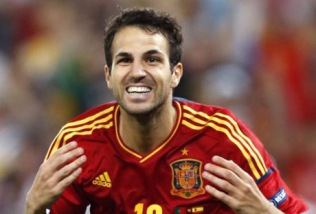 Former Arsenal player, Cesc Fabregas, got his own back.  In his post-match interview with the BBC he said:

It always happens in 3’s

Today bought 3 shock results/news items in the world of sport.

Firstly we discovered that David Beckham had been left out of the GB Olympic Squad by Stuart Pearce who, in his infinite wisdom decided he had a strong enough midfield and so picked Manchester City defender Micah Richards ahead of him.  (Yes, the same Micah Richards who refused to be on stand-by for the England Squad for Euro2012).  When he only had the choice of three over 23 year olds, it seems bonkers to me that Beckham wasn’t chosen – he was part of the Olympic flame handover ceremony in May, bringing it to Britain for the torch relay.   He also played a major role as a sporting ambassador when London won the 2012 bid, and has made no secret of his desire to captain Team GB.

So then we came to this evening’s entertainment!   Starting with  the Euro2012 semi-final between Italy and Germany.  With the Germans the strong favourites I don’t think any of the neutrals watching could believe the happenings on the pitch!  The Germans were rubbish and the Italians were magnificent.  Two sensational goals from the super-loopy Mario Balotelli catapulted them into the final against Spain on Sunday.  There was a wee flurry in extra time where the Germans were awarded a penalty and despite a brilliant strike from Ozil to make it 2-1, it was too little, too late and Italy were the victors.

That just left enough time for me to switch over to BBC2 to see the world No.2, Rafael Nadal, get beaten in the 5th set in the 2nd round of Wimbledon to Lukas Rosol, a player who is ranked 100th in the world!

This charming Czech player modestly said in his post-match interview:

“I know Nadal is only human. Nadal played a good match but I think I was a little bit better.”

The last few games that I was able to watch definitely proved this – he was exciting to watch and I was rather sorry I’d elected to watch the football instead of this tennis match but they were both equally unexpected results which is always refreshing for the armchair sports fan!

Oh well, that’s enough excitement for one day – only the Final on Sunday and the 2nd week of Wimbledon to look forward to before the Olympics – how will I cope???