And while we’re on the subject

Another superb photo opportunity from Her Maj! 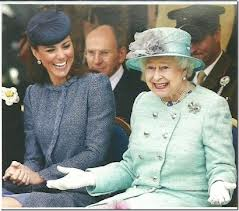 Proving that she does indeed have a sense of humour – during a recent visit to Nottingham with the Duchess of Cambridge, she attended a children’s event in which the 5-10 year olds were asked to present something to celebrate the Jubilee.  Out of more than 1,000 children attending, six were chosen to give their own speech to the queen, expressing their devotion and admiration for Her Majesty’s long reign.  The last child to say his piece was 8-year-old Devon Parker who stood at the microphone a few feet in front of the queen and the royal photographer was able to catch her reaction and response.

Devon Parker:   “Your Majesty, I think you are the nicest old lady in all of England, but I wish you weren’t so old because, if you were younger, you would live a lot longer.  Thank you very much.”

The Queen’s reaction and reportedly her response:   “Now what can I say to that?!?”