← The transport of my youth updated
This little piggy →

It has been a difficult season for anyone supporting Arsenal and today’s derby match against Tottenham was a test of nerves for all of us. In the end however Tottenham threw away a two goal lead to concede five at Arsenal for the first time since 1934.

We scored an incredible 5 goals in 27 minutes either side of half-time to win the game 5-2 and are back up in 4th place in the Premier League Table. Yes, our defense was awful but we were on fire when on attack and 2 goals in as many minutes did an amazing job of easing tension in the crowd at the Emirates. 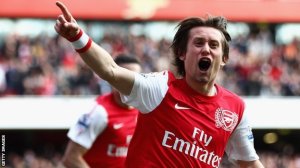 With Arsenal fans ironically chanting”Harry for England”, Rosicky almost made it six after a one-two with Theo Walcott, whose own 2 stunning goals in this game silenced his critics in the stadium – for now at least!

To complete Spurs’s misery, Scott Parker was sent off after his receiving his second yellow card for a foul on Vermaelen. A day to forget for Redknapp – but one that might be of some significance for Wenger and Arsenal.

← The transport of my youth updated
This little piggy →