Amir Khan wasn’t quite as successful in the wee small hours in his fight against Danny Garcia in Las Vegas.  Amir Khan wanted to prove he is the best in his class by beating Danny Garcia and then moving up to welterweight to face Floyd Mayweather.

Khan, 25, went into this light-welterweight bout with WBC holder Garcia as WBA champion after Lamont Peterson was stripped of the title.  Some readers will remember that Khan lost his WBA and IBF titles to Peterson in a controversial defeat last December but the American subsequently failed a drugs test.

Unfortunately though Amir Khan suffered his second successive defeat as he was stopped in round four by the unbeaten American.  He was knocked down three times as Garcia claimed the British fighter’s WBA light-welterweight belt and held on to his WBC title.  After a strong start, Khan was floored in the third by a counter and could not recover from shots in round four.

People have been quick to call for Khan to retire after this unexpected defeat but let’s not forget he is still only 25 years old and has only lost 3 of his professional fights, having won 26 with 18 knockouts.  Perhaps we should leave the final words to the man himself who said on Twitter:

“Can I apologise to my family, friends and everyone. I got caught with a shot and I know millions of you are upset but that’s boxing for you.” 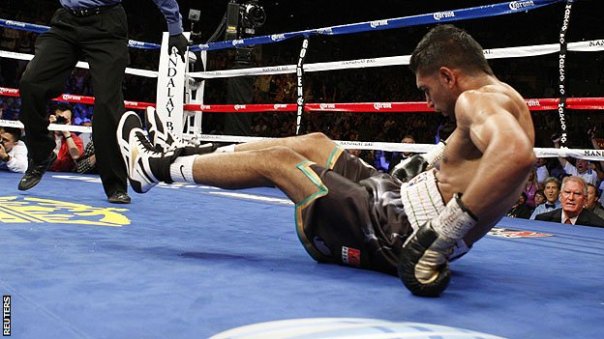